Since its inception in 2009, Blockchain technology has proven to be nothing less than revolutionary to the world. Many narrow down this tech to the world of cryptocurrency only but this is a misconception. Cryptocurrencies indeed came from the development of Blockchain, but it’s wrong to make the two synonymous. The blockchain has done and continues to do so much more beyond the scope of cryptos.

For those who are unaware, Blockchain is a distributed ledger technology (DLT) based on the peer-to-peer topology that facilitates data to be stored in thousands of servers globally which is simultaneously available to all the users of the network in real-time.

Any data stored on a blockchain is-

The internet as we use today is littered with data scrapers and highly-skilled hackers which makes us exceedingly vulnerable to data theft Blockchain often called the Internet 2.0, has emerged as a key player in promoting more secure internet usage.

How does blockchain technology handle the security issues of today?

The greatest thing about blockchain is that it is decentralized and this helps in the accessibility and credibility of the data on it. All the data that is put in the system is always verified and one of the most advantageous factors about Blockchain is that since the network is spread across the world, even if one server is down or somehow damaged, there are thousands of other servers to verify the information.

How exactly it does so ?

Being connected to numerous servers allows the chain and all the data in it to be collapse-proof. Even if one part or block of the network is somehow compromised or hacked, the members of the network can compare any block with other blocks and weed out differences.

In simple words, any data put in the network is visible to all users, every member can easily identify if there have been any security issues and remedy them quickly, making it the best method for record-keeping.

Blockchain also helps in the prevention of fraud. Every user of the blockchain verifies the information put into it, thus eliminating the possibility of the addition of any false and fabricated data on the chain. So, it becomes impossible to ‘fake’ any data on the blockchain either.

What if the data gets stolen?

Another security issue that blockchain eliminates is data theft. 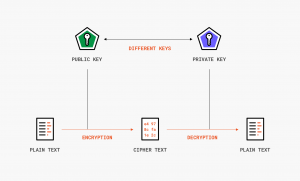 To put it simply, blockchain is tamper-proof, unbackable, and works with the agreement of all the users on the chain- the essence of human interactions.

What and Why of Digital Marketing