By using our website, you agree to the use of our cookies.
Got it!
Cryptocurrency, digital, News Today’s era has undoubtedly established itself as ‘tech-savvy’ and as a proponent of technology. Doesn’t matter where we go or what we do, we are always connected to the technology and by the technology. No wonders, technology has birthed miracles into human lives, which resulted not only in making our life easier but also brought a positive paradigm shift. Today, we cannot think about life without technology.

Out of various wonders, the one we want to talk about today is a technology that has changed our course of actions or response in context to situations/ tasks which require/ involve transparency, data storage, banking and cryptocurrencies etc., . This technology is called- ‘Blockchain Technology’.

The word blockchain technology has been around for a while now and sounds rather complex, but in reality, it is a very simple technology. In simpler terms, Blockchain– which is sometimes referred to as ‘Distribution Ledger Technology (DLT)’ is essentially a database or a digital ledger that works on the principles of decentralization and cryptographic hashing.

Blockchain Technology (a peer-to-peer technology) records information and tracks assets in such a way that the data or the information becomes immutable, hack-proof, transparent and generates smart contracts.

Blockchain is different from any typical or traditional database solely due to the method it uses for storage. Blockchain stores data in ‘chained boxes’. Each block in the chain contains several transactions and when new information is given out, a new block of information is created and a record of that transaction is added and spread out to all the connected computers/ communication networks/ participant’s ledger throughout the globe.

This block is then added to the existing chain, this chain is irreversible, hence creating a blockchain. The communication networks created in blockchain technology are real-time and completely secure. Since the database is managed by multiple participants, it is known as-Distribution Ledger Technology.

It means if someone tampers with one block, it would immediately become apparent to all the connected nodes/ computers throughout the globe and the fraud could be prevented easily.

How does blockchain technology work?

There are three basic concepts that work behind the principles of blockchain technology. 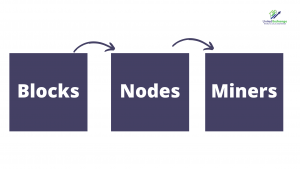 Blocks– When we talk about the block in the blockchain, it means that there is not one, but multiple blocks in a chain. A single block has three basic elements that work behind it.

A block is just like a page in the ledger book. The new information is generated in real-time. The hash is a 256-bit number embedded onto the nonce. Since it is usually extremely small in size, it starts with several numbers of ‘zeroes’.

When the first block of a new blockchain is created, a nonce generates the cryptographic hash. The hash acts as a fingerprint because it gives a unique identification to the blocks and the contents of the block.

Hash of a previous block is always added to the hash of a new block, this is done to maintain chronology and ensure the validity of the blocks. A timestamp includes real-time to keep in knowledge when the block was created and to keep track of the creation and update the time of the block.

A new block always points to the previous block. In case, a block added to the chain does not contain the valid hash value of the last block, it means the block has been tampered with. And changing/modifying any information/block within the blockchain network would mean that all the blocks become invalid within that blockchain.

Miners- Miners are individuals/groups who create new blocks on the existing blockchain through a process called ‘Mining’. They mine new transactions and record/validate them on global ledgers. Miners have to solve complex mathematical problems in order to create new blocks.

Since the nonce is 32-bit and the hash is 256-bit, so out of four billion nonce-hash possibilities, the miner has to find the right ‘nonce-hash combination’. Only when the miners find the one right ‘golden nonce’, their new block is added to the existing blockchain. After successfully mining a block, the change is accepted by all of the nodes on the network and the miner gets financially rewarded.

Nodes–   The whole system of blockchain technology works on the core concept of ‘Decentralization’. There is no particular owner of the blockchain; in fact, the distributed ledger is connected to the network, via nodes/ computers. So, nodes can be any kind of electronic device, be it your mobile phone, computer or tablet, which records each and every transaction on the block and keep the network functioning.

– No wonders that this blockchain technology has been accepted by the people with opened arms because it is no less than magic that has brought ease into many working spheres of our life. It is important that we try to learn the concepts that work behind the newest technology and try to find how it works out for us. Blockchain technology indeed provides -transparency, immutability and security; and opens many new doors to unknown wonders.

Tags #How Does It Work? #What is blockchain technology a
Previous

Digital currency and its Global Acceptance: How does India react to the trend?

What is DeFi? know What Do You Need To Know